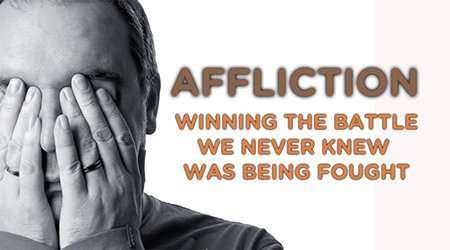 Affliction: Winning the Battle We Never Knew was Being Fought

It is easy for a man to grow dark, to think that his trials and his triumphs are his own. It is easy for a man to shut down, curse the world and wallow in his suffering, believing that his plight is unique to him. Our cold thoughts push all warmth away. We hide deep within ourselves, digging a hole deeper and deeper into our souls. We are alone, doomed to struggles and strife, or so we convince our hearts.

It is easy for a man to forget the comforting touch of better days, to afflict ourselves with scores of sorrow and discontent. We are born to dream big and conquer, but what is left in this world to conquer? The earth is scorched dry from plundering fools and we are left with empty hands.

It is easy for a man to forsake all in pursuit of darker thoughts. Madness of mind, body, and soul is like second nature; it pours forth from our mouth and seeps out of our skin. “Why me?” we complain bitterly to ourselves and to whomever else will listen. At some point without our notice, we surrender in a battle that we did not even know we were fighting.

The secret battle that every man fights is born from an ancient war; it is as old as time, yet feels as new as dawn to each who fights. The enemy is unknown and unseen, yet still charges at us full of fury, with destruction burning in its eyes like a blinding light. But the fire does not come from light. It is hot and burning, but it is empty, an endless abyss. Like the depths of the sea, we drown under the pressure of the guilt and failures that press against us. We struggle to reach the surface but the chains around our feet drag us down.

We do not know because we have lost hope and without hope we cannot have faith. We have lost hope in ourselves, but it is deeper than that. Who gives us the strength to have hope? There is only one. In Job 14, a man much like us cries out in final desperation from his woes. In his final defeat, he comes to terms with the inadequacies of mortal man against the immortal Creator of the heavens and the earth. To him all is lost but, for a moment in his weakness, he glimpses the truth of a promise that had yet to be fulfilled. In verses 13-17 his tone changes as he begs God to hide him until He is ready to redeem him. For just a moment, Job lifts his eyes to the God of grace and sees a loving father who is willing to forgive. Then, just as quickly as the idea came, it was concealed by the burdens that beseeched him and once again his eyes focused on himself rather than of the Giver of hope.

For a moment Job understood as he prayed:

I will wait for my renewal to come.
You will call and I will answer you;
you will long for the creature your hands have made.
Surely then you will count my steps
but not keep track of my sin.
My offenses will be sealed up in a bag;
you will cover over my sin.  (Job 14:15-17)

Today, our redemption has come. God has called us and given us His son who sealed our sins and covered them with His blood. Yet we still live as Job did, believing that the fate of man was to live rejected and forsaken by God. We put our hope in ourselves and when we fail, we lose faith in the only one who can actually save us.

It is hard for a man to put faith in someone else’s hands, to accept that we do not have the strength to fight alone. If we were truly brave, we would understand that our calling was not to keep to ourselves but to seek the one who can save. Bravery is proven by fighting our corrupt nature, by understanding our place, and by opening our eyes to the true battle within. Hiding is easy, but it is a coward’s move. Thinking that we are safer on our own, hunkered down in the darkness, has never been called brave.

Our plight is not unique; we are not the first to struggle or to have strife and we will not be the last. The battle has waged since the beginning of time and it will continue until the end of time, but this is not an excuse for us to forsake our duty. If we are to be men, then we must submit ourselves to our General, the God and Savior of man. We must join our brothers in arms as warriors, fighting for our families, our faith, and our future. With Jesus in command, our fears and failures will be washed away so that we can come together in honor with our fellow man.

It is easy for a man to hand in his faith, to stay silent, to forsake his family and admit an early defeat. It is hard for a man to run the race until the end, but then again Jesus never promised that it would be easy. He did not ask us to go on living as we always did. His call was to the few and the brave, to those willing to give up what was easy in order to do what is hard. A life in service to God was never meant to be easy. For it is the trials and the hardships that will become our proving ground; these are the opportunities for us to shine God’s light on the world, to prove our faith and to stand strong with our brothers against the onslaught of a merciless and unrelenting horde. The trials we face are not proof of an unloving God or even of our own failure. On the contrary, the trials we face are the result of a broken world that has forsaken a loving God. It is not for us to despair in these times; instead, we must learn to trust in the loving God and lead by example. These are not the times for us to lose faith but to prove faith.