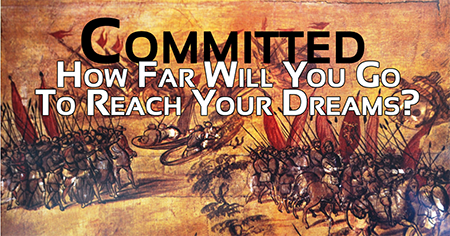 Committed: How Far Will You Go To Reach Your Dreams?

In 1519, Hernán Cortés landed his fleet of 11 ships and over 600 men off the coast of Mexico. He was there to claim the land for Spain, but first, he had to destroy the Aztec empire. There is a false perception that the Aztec Empire was primitive and easy to conquer; in truth, the Aztecs had a very sophisticated society. The people were well-educated and grand architects. Their cities consisted of aqueducts, pyramids, and huge markets. Commerce played a major factor in the empire’s success.

By the time Cortés arrived in 1519, the Aztec empire had been thriving for over a hundred years and spanned most of central and southern Mexico. The empire stretched across 80,000 square miles. The Aztecs were by no means a primitive foe for Cortés. At the time of Cortés arrival, the Aztec capital alone had over 140,000 people living in it. Remember, Cortez had only 600 men, and many of them were not even soldiers; but were sailors, carpenters, and doctors. This information would not have come as a surprise to Cortés, yet he was committed to his goal. He was so very committed that upon reaching Mexico, he ordered all of his ships to be scuttled, just so that his men would have no choice but to fight forward. He wanted to leave no room for doubt, retreat, or plan B. He had a single goal in mind and he wanted no distractions to get in his way (history buffs, please note that I know I oversimplified the story, but I needed to just present the cliff notes to make a point).

How many of us are truly committed to our cause? Sure, we may say that we are passionate, dedicated, even resolute, but do we have a back door and a plan of retreat? From 2011 until late 2013, I was completely committed to Common Sense Development…unless a better offer presented itself. I kept my back door wide open so that I could bolt at the first sign of greener pastures, or failure, or disappointment, or whatever excuse I wanted to present to myself for justifying my lack of 100% commitment to my business. I wanted to see Common Sense succeed, but really all I wanted to do was test the waters of small business ownership to see if it was warm enough.

Scuttling Your Ships
Today, our society teaches us that part of being prepared means having an escape plan, or at least a plan B, but what does that really do to us psychologically? If we keep one foot in the boat, how can we ever get to the heart of the mainland where are goals are hiding? I have learned that as long as I am keeping one eye on other possibilities, I can never fully attain the goals that I have for myself and my business. My business did not start to really take off until it become the only way for me to make a living. Only then did it really become real. My ships were scuttled by accident but it was perhaps the best thing to happen to me because it forced me to take myself and my business seriously. I no longer had an anchor holding me back: I had to dive all in, just to survive.

People say not to keep all your eggs in one basket, but I say, keep just one egg. Cherish it, nourish it, protect it, and let it hatch into a beautiful hen that will, in turn, produce many eggs on an ongoing basis. To use one more cliche (I just can’t help myself), If you have too many coals in the fire, the fire is going to get out of control and burn you. Success is not something that you can achieve without a lot of motivation and commitment so scuttle your ships so that you have no other option but to push forward. There is a lot of power in having a singular, burning, and focused purpose. You can always build another ship later if you have to, but for now, let it go, and walk into the jungle.

Increase your profits with a clear and memorable message
Learn How
PrevPreviousPerfection: A Pursuit of Failure
NextAttention Small Businesses: Do This One Thing to Gain New CustomersNext