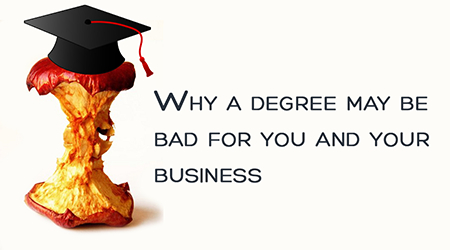 Why a Degree May Be Bad for You and Your Business

I have an MBA (Masters of Business Administration) from a top-notch private university, and the debt to prove it. I am also an adjunct faculty member for a major university. I have a real passion for teaching and helping people learn new skills and abilities. If anyone should be pro-higher education, it would be me. I grew up in the system with parents and uncles who all worked for universities (it is kind of a Zarr legacy…some people are military families, we are a university family).

Truth be told, I am very pro-higher education. People with degrees generally make more money and have proven themselves able to be teachable, meet deadlines, follow instructions, and live up to sets of rules and expectations. A degree, when used properly, can be very useful. Herein lies the problem: our society has begun to value the degree, any degree, more than the learning experience itself.

When I was working on my undergrad, around my sophomore year, I was ready to quit. I had great grades but really had no direction in my life and just wanted to take some time and figure out who I wanted to be. My parents, teachers, and advisors all encouraged me to stick with it. “Just get the degree, any degree,” they said. One advisor that I was close to told me that the major I chose did not matter: all employers wanted to see was that I had a degree. He meant well and, 10 years earlier, I think he would have been right. But times have changed. Unfortunately, our expectations for our children have not.

Today’s economy demands a very technical, skill-based workforce, yet we are still preaching that majors like fine arts or communication (that is my BA) still hold value and will help individuals find a job. Really, we are still preaching that the major does not matter, but EVERYONE should have a degree, even if they don’t yet know what or who they want to be. A communication degree, in the right hands, with someone who understands the field and wants to be a part of the industry, is a fine major, but we have to realize that today’s businesses need very specialized employees. We have to get out of the mindset that the degree is the end result as opposed to the skills and experience gained.

Currently, both businesses and recent college grads are frustrated and hurt by the idea that the degree, any degree, is what matters. According to CNN, in 2013, 43% of college graduates are unemployed or underemployed (working in low-paying jobs that don’t require a degree, such as waiting tables or becoming a barista). The Huffington Post reports that over half of all college graduates are working jobs that don’t require a degree. These grads are overloaded with debt (the average student loan debt is reported to be almost $30,000 per student) and working minimum wage level jobs (or at least close to it).

So what has gone so horribly wrong? Yes, the economy is a factor, but that only tells a small portion of the story. The biggest problem is that instead of teaching our children to dream, to find their passion, to be the best they can be at what really excites them, we funnel them through a system that assigns a letter (A,B,C,D,F) to their chances of success and promotes a one-size-fits-all mentality to learning.

In 1895, at the age of 17, Einstein failed his college entrance exam. He passed math and science with flying colors but failed the other portions such as history and language (he actually had speech issues as a young child). A year later, he passed the exam and got admitted, but the point is that even back then our system did not recognize the brilliance of mastering one or two subjects. Instead, it only recognized those who could produce mediocre results, but in every subject.
The smartest, most successful people in the world are not jack-of-all-trades: they are masters of their one passion. Sure, having a well-rounded view of the world is important. Having a better knowledge of history may have made Einstein even greater, but could you imagine if the world would have lost out on Einstein’s brilliance simply because he misplaced a comma or two on an exam?

I believe that today’s college grads are struggling, just as I did because our society has handicapped them by putting more value on the degree than on the skills learned. Businesses do not need just anyone, who gets just any degree. They need people with actual, measurable, and specific skills.

Yes, getting a college degree is important, and I recommend as many people get one as possible. But first, figure out who you want to be and what you want to do, then get a degree that gives you the skills to pursue your passion.  In the meantime, let’s all stop pretending that it is the degree, the piece of paper that gets people jobs. This is simply not true. The degree should represent the skills that you learned and your ability to perform the tasks of your trade. It is not simply a certificate certifying that you have jumped through enough hoops to join the workforce.

Students, my advice to you is to never settle, follow your dreams, and do whatever it takes to live and work with your passions.

Parents, teachers, and advisors, I will say this: the degree does matter, but only with the end goal of providing skills and experiences that move your student’s passions forward. Don’t encourage them to just get any degree; encourage them to find a career.