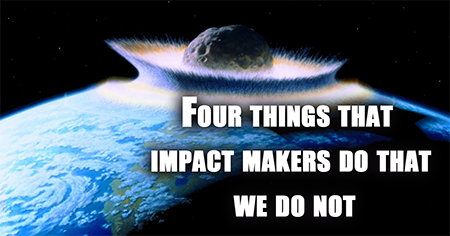 Four Things That Impact Makers do That we do not.

Today was a good day – I got a lot done. In fact, I got everything on my daily checklist checked off. But, as I was completing a bonus item, vacuuming the house, I realized that not one thing I did all day had any impact on the world around me. I had worked hard, task after task, yet what had I really accomplished? I am not saying that everything we do needs to be earth-shattering, but it got me to thinking: what do the movers and shakers of the world do differently than me? Not that I am complaining, but I bet they’re not vacuuming.

Seriously, I really began to ponder; how do those who make big impacts, who actually change the world, walk through their days? What secret do they have that we do not? Then I thought, about how amazing it would be, if more people could use their time to impact their world, even if it’s just the small world around them, in their homes, office, churches, and communities.

This is a huge topic that I would like to do a lot more research on, but there are four things that come to mind right away that impact makers do that we do not.

1. They have a singular purpose. Those who are the most successful and make the biggest impacts in the world do not divide their time and attention between multiple objectives at the same time. They set a goal and passionately follow it until it is met.

2. Passion drives them to action. We throw this word, passion, around too lightly. Real passion is a burning desire that almost drives us mad until it is fulfilled. Real passion is willing to do whatever it takes. It will risk failure, overcome setbacks, take on opposers, and fight until the very end.

3. They never do it alone. This realization hit me hard. Our society likes to idolize the self-made man or woman, but in reality, there is no such thing. Almost every great impact maker, from Steve Jobs and Bill Gates to Julius Caesar, have had people behind them who were just as committed to their cause as they were. The bigger the task, the more people needed. Bill Gates and Steve Jobs started tech companies with a few friends that grew into world-changing, billion-dollar companies. Caesar needed whole armies to accomplish his mission. These men were never afraid to share their vision and bring as many people on board as it would take to get the job done. The relationships did not always last, but the point is that making a big impact means knowing how to invite others to join you.

4. The people they invite along the way have specific skills and talents. It is not just a matter of asking any random person to come along for the ride. No, we are not talking about finding groupies. The impact makers have to ask the right people to come along. People that have the skills, talents, knowledge, and commitment that are needed to move the mission forward. There is no room for ego here. Finding the right people means finding people that have talents and skills that the impact maker needs but does not have. Impact makers are not afraid to bring along people smarter than them at the task they are needed for. Strong talent makes a big impact.

Request Your Free Conversation With Mark