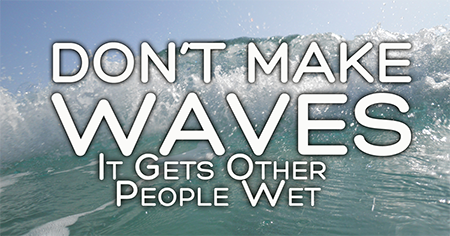 How to Take Back a Culture That Praises the Status Quo

You may remember your mother telling you when you were a young child to stop splashing around in the pool. You would be scolded for making waves and interrupting the relaxation of the adults trying to enjoy a dip amongst all the cannonballs and hoots and hollers of the children. “Stop making waves!” we would be told again, in a firmer voice, as we came up from under the water after completing a masterful backward spin jump into the pool.

Most of us settle into mediocrity, believing the myth that it is better to fit in than to stand out, not to mention stand up for something. The odd thing is that despite our apprehension for standing up and standing out, we are inherently attracted to people brave enough to make waves. Our whole celebrity culture and idealization is dependent upon who can say or do the most controversial thing. Unfortunately, those we look up to are generally known for doing negative things: mass divorce, drugs, DUI’s, or public psychological nervous breakdowns. I don’t think we idealize celebrities for the things they do, but we long to look up to someone, anyone who is willing to say that it is ok to make waves.

The problem is that all those who could be and should be respectable, positive, role models, don’t want to break the number one rule in our society: don’t make waves. Perhaps it is time that we throw that rule out. Perhaps there are people that need to have a little pool water splashed in their face. Our society is so worried about not making waves that we have left all reason and morality in the dust. Today, you can make millions by breaking the rules, being promiscuous, acting out of greed, and lying to the public, but all that is ok because none of it gets anyone else wet…or so we’re told.

While goodness, honesty, and truth take a backseat out of worry about not making waves, the void from their silence is being filled with corruption, dishonesty, and upheaval. As a child, our parents taught us to not make waves. We listened. Now, our children do not know right from wrong and have no concept of good versus evil.  Our young adults don’t know how to stand out so they wait for handouts. The ideals and perspective that once made this nation great are being traded in for a doctrine that says no one is special because everyone is special. Don’t make waves.

In the real world, without waves, everything in the ocean would die and without life in the ocean, life on land would quickly become unsustainable. Soon, the whole earth would be barren. Waves, or more specifically the tides, currents, and storms that make the waves, circulate nutrients and warm life-sustaining water around the whole globe. The soft rising and falling of the waves are the ocean’s way of breathing, of circulating the lifeblood needed for survival.

In much the same way, we need waves in our culture. We need good, honest, trustworthy people to step up and create a storm that sends waves crashing down on to the cold and stagnant water that has become our society. It is time to get people wet, to offend those who are offended by any deviation from the status quo. We must flush out the muddy water killing our ability to believe in ourselves, in our nation, and in our God. Not making waves may be good advice when you at the pool (or working with a vat of dangerous chemicals), but it is outright deadly advice when applied to your business, church, community, or nation.

Request Your Free Conversation With Mark