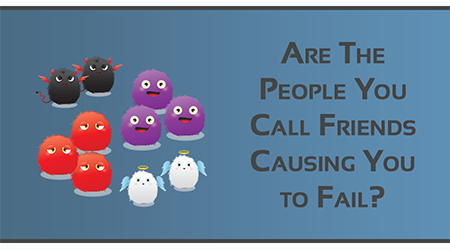 Are The People You Call Friends Causing You to Fail?

It was not that long ago that I was sitting at my desk, wondering why the world seemed to be passing me by. It seemed that everyone was moving forward while I was stuck, hopelessly unable to move any direction but down. Later that day, I had drinks with friends who were going through similar dry spells. Together, we compared misery stories and pointed out everything wrong with the world around us.

Just a couple of years ago, this was a very common occurrence for me, but this day was different because as I sat there with my friends in our glorious gloom, I looked around and saw groups of people who all seemed to look alike. Some looked like us, down on their luck and desperately trying to find someone or something to blame; another group all looked tired and worn out; another sat telling whispers, I assume it was gossip. But one group stood out. The group was slightly older than me and they were all well dressed (not over the top, but professional), but most of all, they were happy and laughing together. There was a difference about the way that they all held themselves and interacted together.

I stared at that group and remembered how that used to be me, then I looked at the group of people I was sitting next to and was embarrassed. I wanted to be like the group across the room, but how could I ever get there if all I was surrounding myself with was doom and gloom? As a group, we thought that we were supporting each other, but in the end, all we were doing was promoting each other’s failures.

What we needed was to hang out with people who were positive, moving forward, and energetic about life and their success. Right then and there, I realized that I needed people in my life that would hold me accountable to success, rather than letting me off the hook by excusing my downhill decline as just bad luck, or other peoples’ stupidity. I did not want excuses anymore. I wanted a plan and I wanted people who would move forward with me.

The only way to move forward and to grow is to be stretched, but if you are only hanging out with people in the same boat as you, you will never learn to swim. At some point, you need to jump out of your boat and swim to a bigger one. Is it scary? Yes, but if we’re not willing to be challenged, then there is no hope for change.

The year that I started hanging out with people who had jobs or successful businesses, instead of my “poor me” support group, I almost tripled the amount of money I made that year. It was not so much that my new friends literally held me accountable nor did they really teach me anything that I did not already know. The big difference, the real turning point, was simply that the people I now spend most of my time with are happy and positive. Instead of filling our heads with all the reasons life is not working out, we discuss new opportunities. Instead of sharing the week’s disappointments, we share the week’s successes. Sure, we sometimes talk about the frustrations of a sick child, or the hassle with a new client, but the hurdles in life don’t define us; instead, they are simply obstacles that we have to overcome.

The point is simple: if you want to be happy, hang out with happy people. If you want to be successful, hang out with successful people. Attitudes and outlooks on life are contagious, but more importantly, the way that we allow ourselves to see the world around us will define how we react to the world. If we’re hanging around people who think the world is out to get them, what can we do but hide? However, if we find people who understand that though life can be hard, it is never impossible, and there’s always hope and opportunities tomorrow, allowing us to be that much more prepared to grab life, rather than to hide from it.