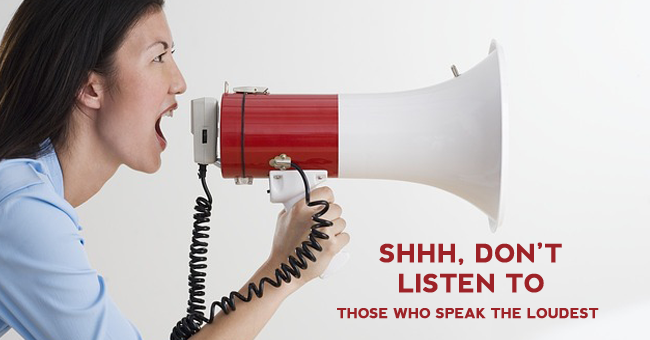 Shhh, Do Not Listen to Those Who Speak the Loudest

Ever notice how those that speak the loudest always seem to be naysayers and complainers? You know who I am talking about – every business and organization has them. The people who always resist change, who can find the negative in any plan. They have an opinion about everything and seem to be most productive at destroying new ideas. These people are quick to point out problems, issues, and complaints, but never seem to be around when a solution is needed.

What I find most perplexing about these people is the ultimate power that they hold over the organizations and leaders that they haunt. They wield their negativity like a double-edged sword, with masterful craft and cunning. The amazing thing is that we listen to these people, and more times than not, change or forsake our plans because of them. We make the mistake of believing that because they are the loudest, their thoughts must also be the most popular. Or, perhaps it is because they are so loud that we fear the turmoil they can set ablaze in our organizations, thus we quickly concede.

The odd thing is that often times it is the consenting, but silent, majority who loses. They lose out on the benefits of what we were trying to accomplish, not because they did not want it, but because they were not heard among the clamor of the loud and dissenting few. More times than not, I find that the silent majority never even had a chance to speak, because once the loud few started talking, the conversation ended before it ever had a chance to begin.

Over the years, I have learned to listen to the loudest with a grain of salt, and to never assume that their complaints and objections represent the majority. Instead, I have learned to listen to those who are silent. I seek the silent out. I make them my advocates and ensure that they have a voice. I have found that the silent ones, who are slow to use their voice, are the ones most able to come up with solutions, and offer sound advice. Those who are quick to speak often get the most attention, but their words fall short when it comes to offering real value to the conversation.

So, what is one to do with those who speak the loudest, only to offer up complaints and negativity that can often shut a group down? The temptation may be to simply ignore them, but this will only make them louder. I have found that there are five steps that can help to get them on board, or at least stop trying to sabotage you.

Ask them what they suggest. More often than not, they just want to know that they were heard. After all, that is why they are so loud. By asking them what they would do, you can shift the conversation from negativity to productivity, from pointing out problems to talking about solutions.

Point out what will happen if no action is taken. After acknowledging their concerns, point out the consequences of not making the change, or taking action. I have found that the loud are so out of fear. Show them, politely, that the alternative is even worse.

Help them see the positive. When people are in a cycle of negative thinking and fear, the positive side is often hidden from them. Point out all the great things that will take place because of the change or the new plan. Make sure that you show them how they will personally benefit.

Get them involved. This may seem counterintuitive, but by giving them an active role in the implementation of the plan, you help them take ownership. The ability for them to feel valued and needed helps ease their fears.

Let them go. If after trying all of the above, they are still unable or unwilling to play along, it is time to cut the rope. You don’t want them to drag everyone else down. Negativity spreads like wildfire and it’s not fair for the silent majority, who are actually excited to be on board. This is easier if they are an employee, but can be difficult if they are a volunteer, church member, etc. The bottom line is that negativity cannot be allowed to fester in any organization. Yes, you want to care for them, but if they are unwilling, you also have to remember that you have other employees, members, etc. that need you and want your leadership. Don’t sacrifice the many to appease the few.

As always, these steps are just a few suggestions out of many. I provide lists because that seems to be the popular thing to do, but it is important to remember that no one size fits all here. What is some other advice or suggestions that you have picked up along the way for dealing with the loud naysayers?

This site uses Akismet to reduce spam. Learn how your comment data is processed.