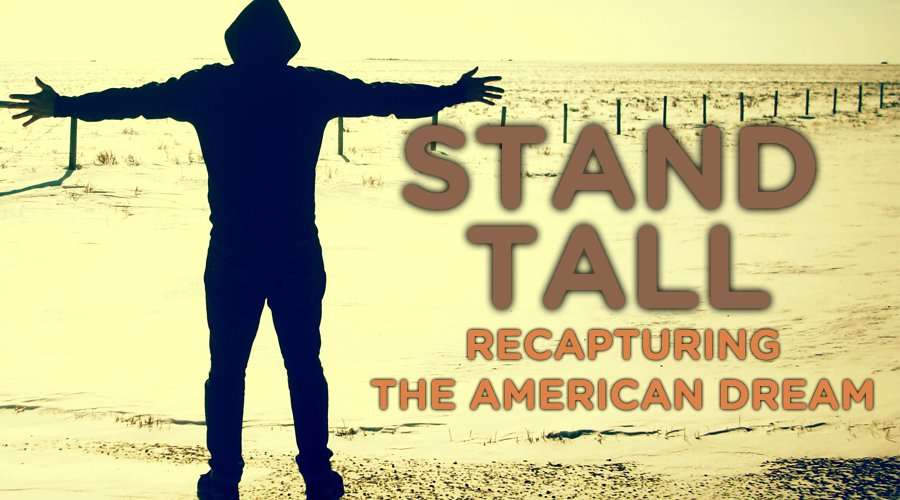 A New American Story
The boy was crouched down as low as could be. His cold body shook as he hid behind his bed. Fear engulfed his senses…nothing made sense. There seemed to be no escape, no real hiding place. He closed his eyes and hoped that the daylight would come soon. He did not know why or what he feared. All he knew was that the people he looked up to would no longer look him in the eyes; they no longer hugged him with comfort. The hope and protection that he once knew with certainty had vanished. Was this to be my new life? he wondered as a shiver flew down his spine. The boy did not understand, but he saw the worry in his parents’ faces and it proved to him that whatever was happening could not be good.

In the room next to him, his father sat motionless watching the news. He was pale looking, exhausted, one could almost say shell-shocked. But there was no war, the heat was on, and the family had just enjoyed a good meal. Still, the father was struck with worry. All would be lost, the father said to himself, as his eyes stayed fixated on the news commentator. For years, things seemed to be getting worse. Money was harder to come by and easier to spend with the rising cost of gas, groceries, and clothes. He had a steady job…for now, he smirked. Every day seemed to be filled with more bad news, more layoffs, more foreclosures. The father felt helpless as he wondered how long it would be until his family was just another statistic added to the unemployment rate.

In the house just across the street, all the lights were out, but through the living room window, you could see the silhouette of an elderly woman sitting in front of a flickering computer screen. She could be found there almost every night posting comments on Facebook and Twitter, warning that the world would never be the same. Her husband had worked hard and made sure that though, he was no longer with her on this earth, she would be well taken care of. But her mind was overtaken with dire thoughts of an uncertain future as her fingers typed feverishly across the keyboard.

Across the street, the father’s phone chirped to life, and his face grew even whiter as he read the latest tweet from his neighbor. All across America, fear-fueled apathy and killed dreams of a better tomorrow as it spread from home to home like a modern-day black plague. Everywhere you looked, hopes, success, joy, and faith were falling victim to the disease.

In his room, the boy began to cry softly. Why was everyone sick? Why was the love that he used to know lost? Would he ever see his father smile again? What was going to happen to him? Tears eventually gave way to sleep as the boy bravely crawled back into bed and laid there watching the flickering of the television through the crack of his bedroom door. The last thing he heard before drifting off into a dreamless sleep was the chirping of his father’s phone breaking up the muffled voices from the television. His last thoughts were of distant memories of his father’s smiling face tucking him into bed with a fairytale and a kiss goodnight. What happened to the world? he thought as sleep overtook him.

End the Nightmare
I am so tired of all the fear and doom and gloom being spread over the internet. It seems to me that America would be a much stronger nation if we all stopping pointing at the problems and started offering solutions. I think that we all declare a new social media rule: if you are going to point out a problem, you must also propose a solution. In all seriousness, how productive is all of the scare tactics we are using on ourselves? Our fear has halted us in our tracks and is setting a poor precedent for the next generation. We have literally decided that these political and economic times are too much for us to overcome.

And you know what? You are 100 percent right. Everything is going to fall apart, exactly as you predicted. It is called a self-fulfilling prophecy. We convince ourselves that the worst is going to happen and then, in our stupor of fear, we start checking out. We stop working as hard, we stop looking for solutions, we ignore opportunities, and we forget what made us great in the first place.

But the fictional story above does not have to turn into a prediction of the future. No matter who is President, no matter how slowly the economy is growing, no matter what laws are passed, there are still a few things that we can hold as self-evident. First and foremost, above our country’s most powerful leaders and superseding the darkest of conspiracy theories, there is still a God whom we serve. A God who encourages us to have hope and believe in our future; “For I know the plans I have for you,” declares the LORD, “plans to prosper you and not to harm you, plans to give you hope and a future.” Jeremiah 29:11. Secondly, but just as important, we are still Americans. We are born from ancestors who fought with everything they had for a belief in a better future. They brought hope to the whole world because, no matter how bad things got, they refused to give in to fear and depression.

Now is the time for us to once again stand tall, to remember who we are and where we came from. Now is not the time to scatter in fear. No, now is the time for us to prove to ourselves, to our children, and to our community that the American way is still alive and well. How do we do this? It is simple: we do what we do best. We work harder, we innovate better, we take care of our neighbor, and at the end of the day we go home and love our family. America’s greatness does not come from who sits in the Whitehouse; it comes from the millions of people that surround the Whitehouse across the country. If we want to see greatness in our country again, then first we must see greatness in ourselves. Stop waiting for some hero to come and save the day.

In America, we are all descended from a great line of heroes, and we are each responsible for the future. Now get up, stand tall, and be the hero that you were born to be. Be the best businessman, the best teacher, the best parent, and the best neighbor that you can be. Alone, none of us can save America, but together with each one of us using our God-given talents, there will always be hope for a better future.


Before you go, make sure you join our community and receive new articles weekly.