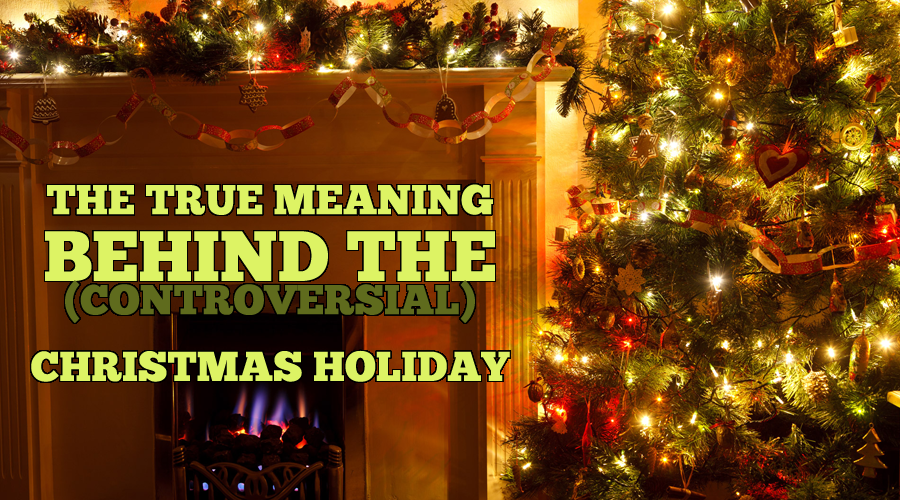 The True Meaning Behind the (Controversial) Christmas Holiday

There is no doubt that American culture loves Christmas. Let me put it a different way: we all love to love Christmas. From the time we were children, we have been taught that Christmas is special. Of course, as an adult, it takes on a slightly different meaning. It is a little less magical, but there is still some inner child in all of us that loves to love Christmas. Even with all the controversy of the last few years about Christmas, the holiday still stands strong. And it should – it has been a part of American tradition for over a hundred years – but why is Christmas so important to us?

If you go to church, we are told it is all about the birth of Jesus. As a proud Christian, this is what I thought made Christmas great for most of my life, but I don’t think Christmas is really about that. For one, Jesus was not born in December. The truth is that we don’t know when He was born, but based on the fact that shepherds were out in the fields tending to their flocks, it would not have been in the middle of the winter season. Truth be told, early Christmas traditions had closer similarities to our modern Mardi Gras than to today’s Christmas. It was a time of drunkenness and chaotic parties, with the main participants being the poor of each community. In early colonial days, the Puritans banned Christmas because it was a time that seemed to celebrate sin and gluttony. After all, December 25 was first popularized as a pagan holiday in the Roman Empire, celebrating the sun god for the winter solstice. Additionally, colonial America was weary of the holiday because in England, Christmas turned into a charity fest for lords and landowners who threw a party for their serfs. For colonial America, Christmas reminded them of the tyranny that they had fled to the new world to overcome and they wanted nothing to do with it.

Christmas as a raucous party continued to be the norm until the early 1800’s, when Christmas was transformed from an adults-only fun fest into a family-oriented celebration of wholesomeness and new beginnings. Yet, even then the controversy stayed strong – it even played a part in the Civil War. The north was still wary of the holiday, after seeing many riots break out in the industrial, over-packed cities, but for the rural south, it was a time to show off your wealth and power to society. A southern Christmas was a great opportunity for the rich to mix and mingle and it was an important time to gain political and social prestige off of their lavish parties.

The south may have lost but, by the end of the Civil War, the southern ideas of Christmas had spread across America. With its newfound popularity, Christmas only grew bigger and bigger, especially as retailers learned that they could capitalize on a child’s excitement for Christmas, Santa Claus, and gifts. Christmas became a federal holiday in 1870 and by 1924, the retail tycoon, Macy’s, decided to throw a huge Christmas Parade (today knows as the Thanksgiving Day Parade) to garner attention to the store at the start of the Christmas shopping season. From there, Christmas, as we know it today really, took off.

So how did Christmas become a Christian Holiday? There is really no easy answer and there is a lot of debate on the topic, but some would say, around the 4th or 5th century, Catholic clergy attempted to co-op the centuries-old traditions of the December pagan holidays that were very popular, even among Catholics. But that is not really the point. I am not trying to debunk our Christmas traditions. All I am trying to do is explain the history so that we can better understand why the holiday is so important to us, yet so controversial at the same time.

Today, the controversy seems to be over religious freedom. There are some who resent the Christmas season because of its close ties to Christianity, which is odd considering most of our Christmas traditions have very little to do with Christianity. On the other side of the fight are those who insist that Christmas has always been about Christ’s birth.  To further muddy the waters, at the same time they put up a manger, they also drag in our modern-day version of the pagan yuletide log, now called the Christmas tree. Also, on top of the house, is the magical character Santa with his flying reindeer.

Historically speaking, the actual Christmas holiday evolved from the Feast of St. Nicholas, held on December 6, celebrating the life and death of a very generous, early 4th century Catholic Bishop who gave his family fortune away to the poor. St. Nicholas, the man, eventually became the inspiration behind the story of Santa Claus. There is a real irony in this when you really think about it. First, we lie about the day Jesus, the Son of God, was born. Then, we turn the legacy of a man dedicated to serving the Son of God into a magical character, with god-like-attributes and flying animal companions, who breaks into our homes late at night to eat our cookies. No, this did not just turn into an anti-Santa article: I love the story of Santa; it is fun and cheerful (if not a little scary). The point is, where does the fiction end and the truth begin?

Here is where it really gets personal for me. As Christians, we get so protective of our Christmas holiday, when the truth is it has only been around as we know it for about 100 years, a short history in the story of Christianity. We demand to protect the sanctity of a holiday that teaches our children Away in a Manager and Rudolph the Red-Nosed Reindeer all under the same holiday. It is all very confusing. It gets borderline dangerous when you realize that as Christians, we are telling our children and society that our most holy of holidays is built on two lies: Jesus was born on December 25 and Santa will bring gifts to all the good little boys and girls. We quickly learn that Santa is not real, and it is justified as a fun game parents play with children, but then what about the birth of Jesus? Once the truth of Santa is found out, what are people supposed to believe about the validity of the Savior of man, the Savior we have reduced to a helpless baby in a manger on a cold winter’s night?

So why is Christmas so important? The bottom line, it is all of the above. Christmas, like America, is a melting pot of ideas, traditions, and beliefs. It has evolved and grown over the years and spread across the globe as one of the only international, interreligious holidays in existence.  Like our country, Christmas is a paradox, an example of hope and light that shows the world that different, even competing beliefs can come together to create something 100% unique. So for all of those out there who say we should remove Christmas from our culture because it is backward, offensive and closed-minded, perhaps you need a history lesson. Christmas, with all its many different origins and traditions, is one of the most diverse and open holidays to ever be celebrated. Yes, it is controversial, but that is what makes it magical. It is a reminder that at the end of the day, no matter what you believe, we all value some of the same things: good friends, close family, a warm fire, and lights twinkling on a Christmas tree. If that is offensive to you, I highly recommend you get professional help to get over it.