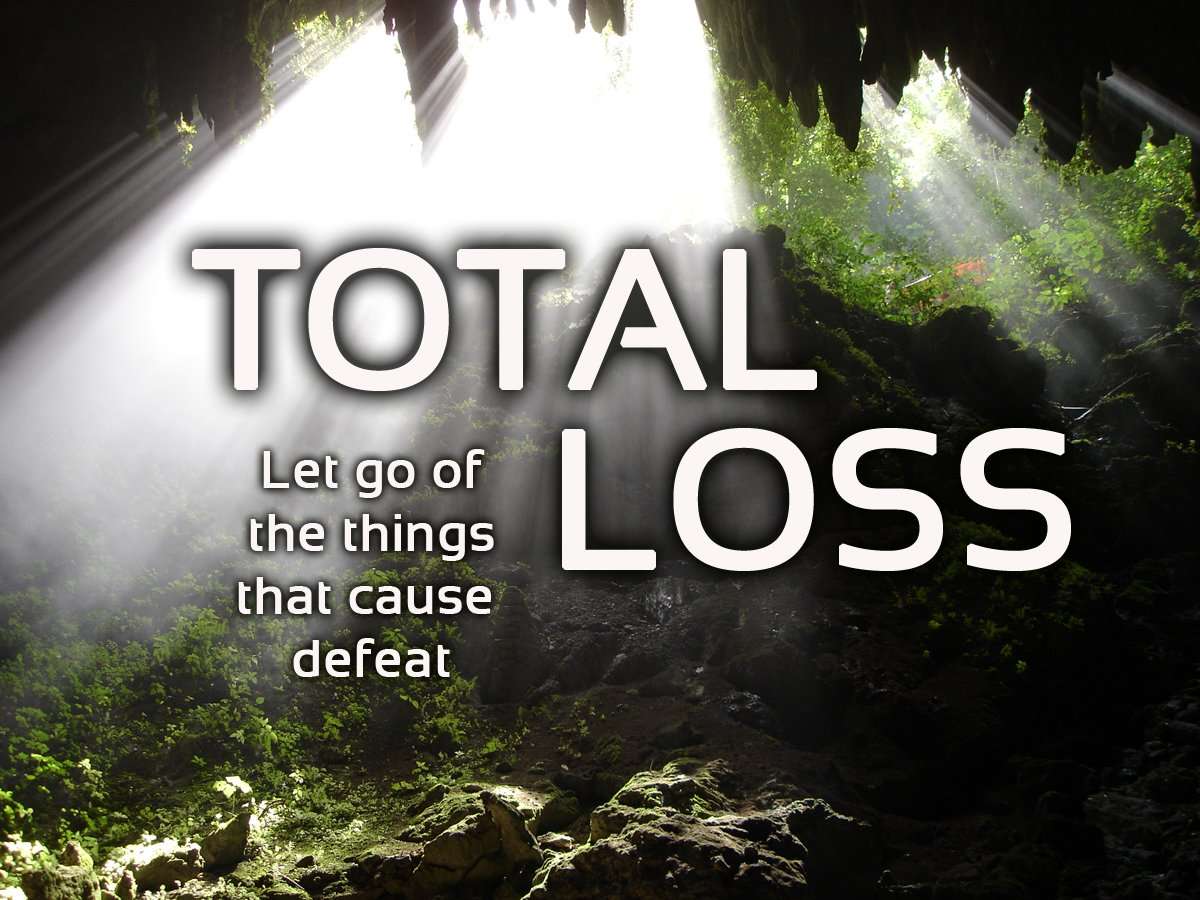 Total Loss: Let Go of the Things That Cause Defeat

I am frustrated, I am scared, and I feel abandoned by the whole world. Life seems to just be passing me by, and it does not even stop to wave a pleasant hello.  Everywhere I look, there are frightened faces peering out from the shadows of despair, their hopeless eyes fixated on an unknown (and unseen) enemy. A battle-weary horde, they crouch in the corners where darkness can hide their exhausted souls. Defeated and surrounded, only the echoes of their lost prayers pierce the silence all around. Then, from the depths of the darkness, a cry breaks through, then another and another. Sobbing now, my face is wet as I realize I am the horde. My dreams shattered, my hopes buried in the rubble of failure upon failure. I now stare face to face at my captor. He stands tall and strong; his eyes, seemingly set on fire, probe me for weaknesses. He searches to see if there is any will to fight left within my body. No need, my fate has been decided. The verdict is in. It is a total loss.

My eyes close as weakness overtakes any remembrance of fear. Suddenly, I see a flicker of light that was there and then gone, taunting me…there it is again. I hear a familiar echo bounce off the walls of darkness in the distance. My captor’s eyes, moments ago so full of fire, now grow cold. His dark body twitches and tightens. The echo is louder, now closer. Another flash of light catches my attention. But this time it does not go out. The echo can clearly be heard. It is my prayer, lost in the darkness, but found by the light, it is now being carried toward me. The light has completely filled in the darkness. My captor’s strength and overpowering presence now seems worried and ready to flee. His strong arms fumble with his armor. The light draws closer and I began to make out details within it. The light is a strong warrior. Sword in hand, he marches full of power and authority. Yet, there is an unexplainable grace about his presence. I struggle to catch my breath as I wonder, is he friend or foe?

He is now upon me and my captor. I watch in stunned surprise as his sword strikes the dark captor. One blow and the dark one is gone. The remnants of his armor lay burning on the ground. The warrior then slowly turns to me and, without saying a word, beckons me to stand and follow him out of the darkness.

My problem is that I want to control everything. I scratch tooth and nail, trying to rely on myself. Sure, I proclaim to trust in Christ. Of course, I say that I am following God’s will. But all the while, I am walking deeper and deeper into the darkness. Each step I take forward is actually throwing me backward. Back to who I used to be. The realization that no matter what I do, I will lose is terrifying. But it does not have to be that way. The other side of the story is that there is another way.  My strength, my will, and my understanding all lead to a total loss. But that is the way it is supposed to be. This life is not about me. This battle is not meant for me to fight. By picking up my sword, all I do is anger a giant that I cannot defeat.

Christ came to earth. He lived, died, and rose from the dead so that I don’t have to fight unbeatable battles. The thing is, I want to fight. I am not some helpless baby or a weak and innocent bystander. I want to stand up for good and defend against evil. In my own puny way, I too am a warrior. But how do I stand up against such an unconquerable force? Oddly enough, the first step to becoming stronger is to surrender. No, not to the enemy, but to my Commander and Savior. By surrendering my will and my expectations to Christ, he can fill me with the tools, power, and passion to fight the battles that HE needs me to win. Being a Christ-follower does not mean that we stop fighting; it simply means that we put ourselves under a more proficient commander than ourselves. It means that during the battles that make up our life, we fight hard but never take our eyes off of the only one who can guarantee our success. If we try to fight alone, we will end up surrounded, but through the strong and powerful grace of God, our lives can be filled with light. The battle is ongoing; the days are hard and tiresome but by putting our faith and our hope in Christ, all will not be lost. In the final days, we will gain victory and it will be the enemy at our feet suffering total and ultimate loss.