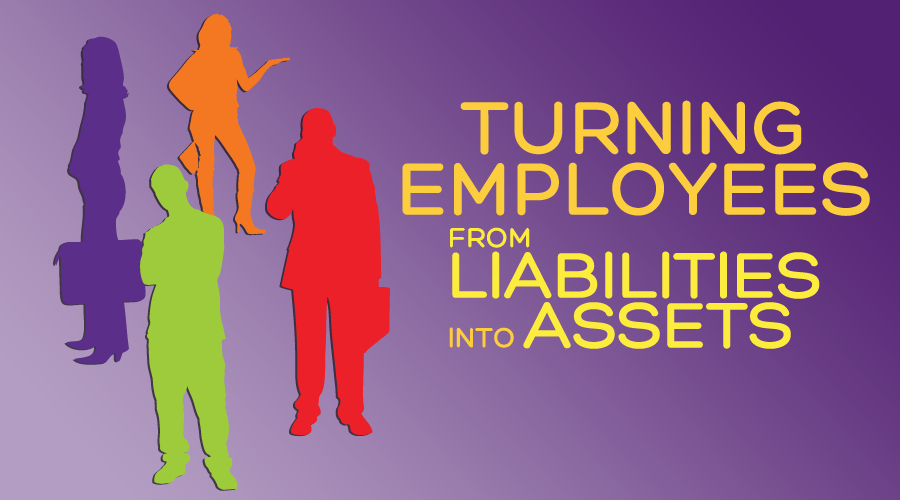 Turning Employees from Liabilities to Assets

I have been managing people since I was 16 years old. I started my management career as a volunteer leader of a school organization. Managing a bunch of my peers (who are also volunteers) quickly taught me strategies that I still use today.  I got my first job, with actual hiring and firing responsibilities, at Target when I was 20 years old (that seems like an eternity ago). I walked into a situation where I was supposed to manage people three times my age who had been with the company since I was only 5 years old.

The only thing that differentiated me from those who (frankly) were older and much wiser, was that I had a college degree. According to our culture, that somehow made me more capable, but that is a whole other point (see below). To say that I was walking into a hostile environment would be an understatement. I was green, young, and inexperienced, and all my staff had to do was look at my baby face to know it. I even grew a goatee just to look a little older. Yet, there I was, pierced ear and all, tasked with leading people who had voted for presidents I only read about in the history books. The only saving grace, and what I believe quickly made me successful, was that I had no illusions of grandeur. I knew I had a job to do, but I also knew the only way to do it was to build bridges, not burn them.

Going back to my high school days managing volunteers, I knew that the best way to get people on board was to give them a voice, responsibility, a common goal, and the respect that they deserved. I never pretended to be better than my staff. Sure, I asked for their respect, but I got it by first acknowledging their accomplishments. Within a couple of weeks, I was able to get my staff on board with me. Not because I gave them ultimatums or wielded power. I spent the first few weeks getting to know my department heads. I asked them what they needed to improve their departments (apparently they had never been asked this before). I was their boss, but I was also their advocate, working to provide them the resources they needed to succeed. I allowed their experience to be used in a way that they were never able to before. They knew their departments best, and I saw my job as being best served by empowering their expertise rather than fearing it.

I don’t tell this story to pat myself on the back (OK, maybe a little), but I tell it to point out some big problems that I see with today’s leaders and even our society as a whole.

Issue #1. No distinction between leadership and management.

Leadership and management are not the same thing. Leaders are reasonable for setting the overall vision and empowering the right people to bring that vision forward. The problem is that many leaders also try to take on the role of managers. Instead of empowering, they micro-manage; instead of inspiring and asking their team to create ways to improve, they dictate what they think is best and expect everyone to fall in line, no questions asked. A great leader knows that they need amazing managers. Yet, today’s leaders often hire people they can control rather than benefit from. There is an unwarranted fear that if you hire someone too good, they will steal your job or take over your business (we see this a lot by the prejudice in hiring people over 50). I knew that if I hired the right people, my department, or today my business, would thrive. I want people who are better than me at the tasks I hire them for. If I am better at their tasks then they are, I don’t need them; they do nothing to move my company forward.

Issue #2. We put too much emphasis on higher education.

Don’t get me wrong: I am not against higher education. I am an adjunct professor and have a master’s degree in business. What I don’t like is that we devalue experience in place of higher education. My best graphic designer for my marketing firm has no degree, but he has a lot of experience and a lot of natural talent. He did not need a higher education to master what he does so proficiently, yet most companies would not even take a second look at him. Their loss. Going back to my Target days, I always felt bad for those on my staff who I had to rely on, but they had no hope of advancement in the company, even after 15 years of commitment, simply because they did not have a degree. I could not have done my job without them, and many could have and perhaps should have, had my job. In fact, I did not stay with Target for very long. After only three months, I was offered a big promotion, but I turned it down and left the company to start my own business. I wanted to create a culture where I could value people, their skills, and their experience, not just a piece of paper that they paid way too much for. I graduated, with honors, with an MBA, but knew nothing about running a business until I actually stepped into the real world and got my hands dirty. I will hire people with callused hands and no degree way before I will hire someone who thinks they know all the answers simply because they aced their final exam.

Issue #3. As leaders, we don’t like to be questioned

OK, this is a big one. We believe that being the boss means that our employees’ ideas, thoughts, and  YES, even disagreements are irrelevant if not outright mutinous. As the boss, my word is final: I pay the bills and it is my business at stake. But that is precisely why I want my people to speak up. I hired them to be the experts at what they do. Even while I owned a chain of smoothie shops with my family, the standing rule was that my staff, those making smoothies and running the cash register, had to follow every rule, policy and procedure until it was changed, but they could always come to me with better ideas. My company grew because of changes we made based on the thoughts and ideas of high school kids. These kids were in the trenches, making drinks, and working with customers. When they came to me with valid advice, I listened, because I knew that they knew things I did not. They heard from customers a lot more than I did. This does not mean that I changed policies on a whim or anytime someone came to me with a complaint. But the culture of openness made the company better. Of course, there were still rules. If employees took it upon themselves to ignore our processes or change them without approval, they were let go. There is a big difference between outright rebellion or laziness and employees who are eager to improve the company they work for. The problem is that today we just assume that any employee that questions us is being rebellious instead of trying to serve and improve the company that they love.

As business owners and leaders, we have a choice to make at the end of the day. We can treat employees like liabilities, waiting for them to make a mistake so that we can pounce. Or, we can turn them into assets, by treating them with a firm but fair hand, empowering them to do their job and then holding them accountable for their actions, either good or bad.