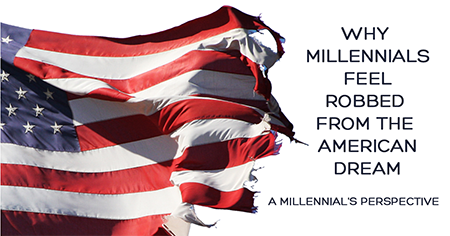 Why Millennials Feel Robbed From the American Dream: A Millennial’s Perspective

As a millennial, I found myself in my early thirties with a wife and our first baby, a five-month-old son. I see myself as highly educated and extremely motivated. I graduated with my Masters Degree In Business Administration (MBA) with honors, was highly engaged in both my undergraduate and graduate schools and have over 10 years of professional post-college experience.

By all accounts, I should be enjoying the benefits of a rising career, but like so many in my generation, me and my family struggle and push and pull just to make ends meet. I work two part-time jobs plus run a marketing and branding business. My wife works for Boise State part-time and teaches piano lessons, in addition to caring for our son. All said and done, the two of us work 5 jobs in order to pay our bills. I find myself often working 14 hour days, sometimes until 2 in the morning, just to try and fit everything in. For all of this hard work, we live in a small three-bedroom rental and basically make it paycheck to paycheck. What little we have left in savings, the government takes as self-employment tax in April (both state and federal). It seems like no matter what, our generation just can’t find any solid ground, not yet try to get ahead.

I hear a lot of people, even some millennials, blame entitlement issues on our lack of success. I have even said as much from time to time. However, I now see this as nothing more than pandering, and it is simply untrue as a generality. Sure, some are entitled, but every generation has their spoiled brats. Maybe we have more than our fair share, but overall, the majority of us feel no such entitlement. We are not asking to be spoonfed; we just are asking for the opportunity to prove ourselves and be rewarded according to our efforts. This is nothing more than any other American generation has ever asked for.

From my perspective, I believe it is really the older generation who has an entitlement problem. You see, I graduated with tens of thousands of dollars in student loan debt – my monthly payments are almost $400 per month. What did this money pay for? I sat in classes with 400 other students, got no personal interaction from my professors, but was able to pay for my department chair’s $120K salary, and the VP’s $180K salary, and the president’s mansion…the list could go on. My generation was told that this was the price to pay to create a better life, so we paid it.

We were lied to. That is the truth. Once we graduated, the same people that told us to get the degree for a good-paying job, want to pay us $10 an hour, not even enough to cover student loans and standard expenses. Then, after working 80 hours a week at two or more different jobs, when we complain to the guys making $100K, they say that we are entitled and spoiled, and don’t know the meaning of hard work! This is not about spreading the wealth or going after the 1%. No, this is about the unfair expectations that have been put on our generation. For example, we are asked to pay for the elderly’s retirement and health care, while not having enough to even buy band-aids for ourselves. We are told that our parents walked to school in the snow, uphill both ways while wearing sandals. All the while, we would just love a new pair of sandals.

We don’t want a handout, but a hand up would be nice. More than anything, we just want someone to acknowledge the hard times we are going through, take us by their side, mentor us, prepare us, and treat us with respect, instead of trying to take advantage of us with low pay, and no opportunity, and then ridicule us when we point out the hypocrisy.

We were unprepared for the real world

If there is one big problem that we do have to own, it is that we really were not ready for the real world. We grew up being told that we were special. School taught us how to pick multiple-choice and memorize unrelated facts, but we were never taught how to think for ourselves or how to make choices when there was no A, B, C, or D to choose from. We were told that success came from jumping through hoops, not from creativity and originality. We were taught that everyone was a winner and got a trophy.

So yes, the real world surprised us a little. It was nothing like school. Even college failed to provide a real perspective on how the world operated. We could party all week long, just so long as we crammed for the test and passed it on Friday. Moreover, we were never taught about truth, or right and wrong. We were told that morality is subjective and that truth was an illusion. The Bible, Prayer, even the Pledge of Allegiance was never taught to us, yet now as adults, society was us to be moral, mindful, and loyal. These things are foreign to us, though we do long for them. There is something deep within us, even though we were never taught these things; there is a hunger that wants to be filled.

What do Millennials want?

More and more, you see young people leaving Idaho, my home town, and other rural areas. Why? We’re tired of the good old boys club. If there is one thing we hate more than anything, it is the idea that it is who you know, not what you know, that gets you ahead. Sure, we are friendly, social, and master networkers, especially online, but our strongest sense of right and wrong comes from a belief that competition should be fair. After all, this is one of the only values that we were taught. Life should be fair and everyone should be given an opportunity. Therefore, it is absolutely maddening when the same people that taught us these lessons, turn their backs on us and on the values that they instilled within us. Again, it is one of those things where we feel betrayed and lied too. We jumped through all the hoops, worked hard, played by the rules, only to find that the points don’t matter.

Basically, we just want the opportunity to prove ourselves, our worth, and our value. We are not the kind of people that want to sit on the sidelines, yet we have been sidelined by society. They created us, but have no place for what they created, and honestly, that just kind of hurts.

There has been some great discussion started by this article on LinkedIn and Facebook. Some people have gotten the meaning behind the article others have missed interpreted it as simply one guy complaining about not making it big. This, of course, was never my intent. In the article, I use myself as an example to tell a real-life story, but my story is shared by countless other young people that I talk to every day. The intent of the article was not to complain, for myself, but to shed light on a topic that most people just want to sweep under the rug or blamed on entitlement, etc. One thing that some people have said is that the American dream is no longer attainable. In some ways they are right. I wrote a similar article a couple weeks before this one, and thought it would be good to post it here. This article talks about how today’s version of the American dream has gotten too big for reality.  Who Gets to Live the American Dream Anymore?